THE WIRE | STALLION NEWS BloodHorse.com / OCTOBER 7, 2017
Crossing Malibu Moon with Nureyev’s daughters has been successful enough to be a good omen for Tommy Town Thoroughbreds, which announced it will stand grade 2 winner Stanford in 2018. 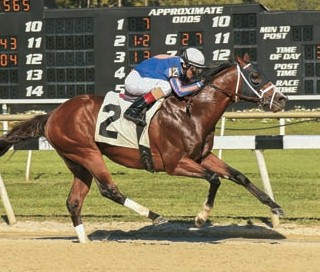 Stanford will become the only son of Malibu Moon to stand in California. His fee will be $5,000, stands and nurses.

The Golden State’s broodmare population is infused with plenty of Nureyev blood through his son Unusual Heat, the six-time leading sire in California who died May 17 at the age of 27.

So far the Malibu Moon/Nureyev cross has resulted in seven foals of racing age, of which four have become winners. More importantly, two of those runners are black-type winners (a 28.6% strike rate from foals). The stakes winners from this cross are Madly Truly, who won the Mazarine Stakes (G3) and placed in the Ontario Debutante Stakes, and Grant’s Moon, who won the Alma North Stakes and has placed in three other black-type stakes.

Malibu Moon also has sired successful runners when crossed with the daughters of Bertrando, an Eclipse Award champion who stood in California from 1994 until he was pensioned in 2011. The son of Skywalker died in 2014 at the age of 25. This cross produced stakes winner Velvet Moonlite and two other winners out of four to race.

Bred in Kentucky by WinStar Farm, Stanford was sold as a 2-year-old for $550,000 out of the Kings Equine consignment at the 2014 Barretts March sale to trainer Todd Pletcher. Stanford raced for the partnership of Stonestreet Stables, Susan Magnier, Michael Tabor, and Derrick Smith.

Stanford broke his maiden at first asking at 2 and at 3 finished second in the Louisiana Derby (G2) and the WinStar Farm Easy Goer Stakes before getting his first black-type win in the Long Branch Stakes at Monmouth Park. At 4 he won the Charles Town Classic Stakes (G2) and the Harlan’s Holiday Stakes (G3) while also finishing second in two other graded stakes. This year Sanford set a track record for 81⁄2 furlongs in the Challenger Stakes at Tampa Bay Downs, which he won over graded stakes winners Blofeld, Ami’s Flatter, and Idolo Porteno in 1:41.75.

Out of the Distorted Humor mare Rosy Humor, Stanford is from the same family as top sires Johannesburg and Tale of the Cat. He has compiled a 6-5-0 record out of 17 starts and earned more than $1.38 million. —By Eric Mitchell