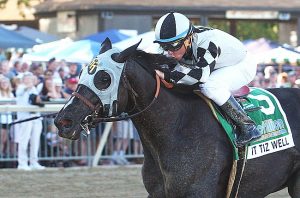 By Erin Shea
Refusing to let her multiple grade 1 winning competition get away in the stretch, It Tiz Well dug in and held on to pull off a two-length victory in the $1 million Cotillion Stakes (G1) at Parx Racing Sept. 23 over 4-5 favorite Abel Tasman.

Tommy Town Thoroughbreds’ Arch filly and jockey Drayden Van Dyke stalked the pace for most of the 1 1/16-mile race on the dirt for 3-year-old fillies. After Abel Tasman and jockey Mike Smith moved up along the rail in the backstretch to engage the leader Lockdown and the two went head to head into the turn for home, It Tiz Well moved three wide and dug in to run down the pair in the stretch.

Abel Tasman, who entered the 11-horse field on a three-race, grade 1 win streak, had to settle for second.

“We thought she was training very well and we thought she’d have a good chance to win that race. We thought she would be tactical and she was today, that wasn’t unexpected,” Hollendorfer said. “I’m just very happy for her and for (Tommy Town Thoroughbreds’) Tom Stull.

“It’s a big race and she’s coming around at the right time. Maybe we can get her in another big race before the end of the year. I haven’t decided yet but I would like to look at the Breeders’ Cup (Distaff, G1).”

In Saturday’s event, Lockdown broke sharply under jockey Luis Saez and assumed the lead, taking the field through fractions of :23.26 and :47.27 for the first half-mile as It Tiz Well tracked in second on the outside. After a slow start from post 10, Abel Tasman rushed up the rail to engage Lockdown going around the far turn.

Six furlongs went in 1:11.37, as Lockdown and Abel Tasman were battling for the lead coming into the stretch. It Tiz Well moved three wide around those two and continued to dig in as they approached the finish. Edging away in the final strides, It Tiz Well hit the wire two lengths ahead in a final time of 1:43.67 on a fast track.

“She ran today like she ran at Delaware Park (in the grade 3 Delaware Oaks July 8),” Van Dyke said. “Set off the pace and relaxed, and when I called upon her she responded. She was perfect.  When I saw Mike (Smith aboard Abel Tasman) coming up on the inside, I sat off her and waited, and they kind of went away from me for a few seconds and she was there for me the whole time.”

Bred in Kentucky by Allen Branch and Susan Branch out of the stakes winning Tiznow mare It Tiz, the filly was a $230,000 purchase at the 2015 Keeneland September yearling sale out of the Greenfield Farm consignment.

On the board in nine of her 10 starts, It Tiz Well won one of two starts as a juvenile before jumping into graded stakes company this year. She finished second to Unique Bella in the Santa Ynez Stakes (G2), then won an allowance optional claiming race before taking the Honeybee Stakes (G3) at Oaklawn Park in March. She followed that effort with a third behind Paradise Woods in the Santa Anita Oaks (G1), ran fourth in the Summertime Oaks (G2), and then shipped east and won the Delaware Oaks by a half length.

It Tiz Well entered Saturday’s race off a runner-up effort to Elate in the Alabama Stakes (G1) Aug. 19 at Saratoga Race Course.

It Tiz Well led for most of the way in the Alabama until Elate took over in the stretch and drove to the wire to finish 5 1/2 lengths ahead.