It Tiz Well Makes The Grade in Honeybee 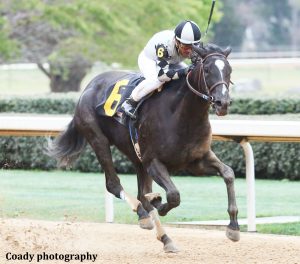 Under jockey Corey Nakatani, the daughter of Arch raced just off the pace in the 1 1/16-mile test in her first two-turn try before digging in around the second turn and winning a stretch duel with Benner Island to score by one length.

“I’ve always been really high on her since I’ve worked her back in January,” Nakatani said of the filly, who was making her first start Saturday outside of Southern California. “I’ve had so much faith in her from working her in the mornings.”

Longshot Someday Soon went for the early lead out of the gate, setting fractions of :23.06 and :47.03 through a half mile. Tapa Tapa Tapa inched up from second and took over the advantage, maintaining a narrow margin as It Tiz Well began to make her move. Six furlongs went in 1:11.58.

Into the stretch, it was Benner Island and It Tiz Well battling toward the wire, but It Tiz Well outkicked her rival and stopped the clock in 1:42.61. Elate finished third with a late run, 3 3/4 lengths behind Benner Island.

In her other graded stakes attempt, the Jerry Hollendorfer trainee finished 7 1/2 lengths behind Unique Bella in the Jan. 8 Santa Ynez (G2). She now has a record of 3-1-1 from five starts.

“Jerry has had a lot of confidence in her… And thought this would be a good spot to get away from (Unique Bella) and get her around two turns,” said assistant trainer Don Chatlos. “(Hollendorfer) knew Corey knows Oaklawn and (that he) had a good, tactical filly.

“We love it here, we know she likes it here, so we’ll see what (the owners) come up with (for her next start).”

Bred in Kentucky by Allen and Susan Branch, the winning filly was sold to Tommy Town for $230,000 out of the Greenfield Farm consignment to the 2015 Keeneland September yearling sale.