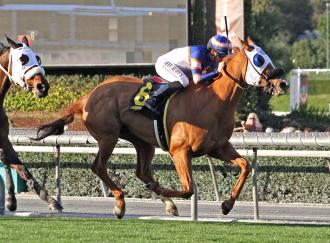 By Steve Andersen DRF.com
Arcadia, CA (January 26, 2019)-S Y Sky was unable to shake clear of Queen Bee to You in Saturday’s $151,053 Sunshine Millions Filly and Mare Turf Sprint at Santa Anita. That half-length margin between the two mares on the hillside and early stretch remained the same at the finish.

For S Y Sky, the Sunshine Millions Filly and Mare Turf Sprint for California-breds was her third stakes win. For Queen Bee to You, the race was her second runner-up finish in a statebred stakes in the last six months.

Through the duel, jockey Joe Talamo thought he had the edge with S Y Sky.

“She skips over the grass,” Talamo said. “It was a pretty good race. I knew I had a lot of horse left.”

The win was the fourth victory, and second stakes win of the day, for trainer Phil D’Amato. He won the California Cup Sprint earlier in the day with Touching Rainbows.

S Y Sky set fractions of 22.07 for the opening quarter-mile and 43.98 for a half-mile, closely followed by Queen Bee to You.

Talamo has been aboard for all nine of S Y Sky’s races.