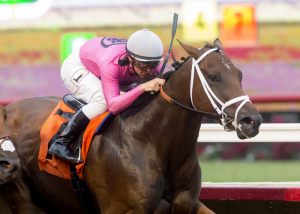 Mr. Hinx is by Ministers Wild Cat, out of the Put It Back mare Kitten Exchange, was bred by owner Gary Barber and is trained by Steve Miyadi.

“Steve told me Mr. Hinx is still learning and getting better every day,” said Barber. “Steve’s done an amazing job with him. It’s really good because this mare is now in foal to Boisterous in California, I’ve got about 13 mares to him. It’s good for Ministers Wild Cat for the Tommy Town group. I love the Cal-bred company. It really does (pay to be Cal-bred).”

He has five wins in eight starts, earnings of $326,548 and was coming off a win in a June 9 optional claimer.