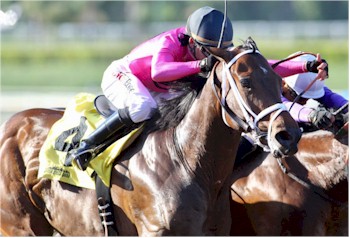 Jockey Tyler Baze, “The entire ride went really well. I wasn’t really expecting to be on the lead. I schooled (Mr. Hinx) in the dirt the last couple workouts because I didn’t really know where I was going to be in the race. Steve (Miyadi) just made me school him in the dirt. So, when he broke in the lead, I wasn’t going to grab a hold of him and cut his air off to take him back behind other horses. He was out there, comfortable.

“He’s a very nice horse with so much talent. I haven’t gotten to the bottom of him yet but I know that there’s a lot there and he’s learning. He’s developing and getting better every day.”