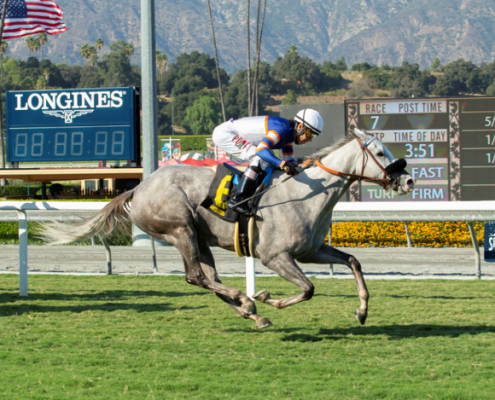 Breaking from the far outside in a field of six California-bred fillies and mares, Just Grazed Me was sitting second, a length off her more fancied stablemate S Y Sky heading to the half mile pole, but when Don’t Sell and Mario Gutierrez rushed up to apply serious pressure from the outside, Franco was able to ease back off of a head and head battle for the lead heading into the far turn and it paid dividends in the final sixteenth of a mile.

“At first, we were running one-two with her stablemate and I thought it was sweet,” said Franco. “Then the number five (Don’t Sell) started pressuring us from the outside and I thought we were going too fast…So I was able to sit and wait and she had a great turn of foot through the stretch.”

“She’s really stepped up her game ever since we put her on the grass and found a home,” said D’Amato. “She showed a real nice turn of foot late, so I’m excited to campaign her in the future. We’ll probably run in the (Senator) Ken Maddy (Grade III, $100,000 at 5 ½ furlongs on turf Nov. 2). It’s against open company, but I think if she runs this kind of race, she definitely fits with those.”

As for Alexander, one of California’s most successful owner/breeders, he was elated that his stallion, Grazen, picked up another stakes winner.

“Grazen is like the goose who laid the golden egg,” he said. “He’s 13 years old, has had eight crops and is about 95 percent fertile. He stands for just $5,000 at Tommy Town, a few miles down the road from our ranch (Horse Haven Ranch in Santa Ynez). He spends the off-season at my place in our back yard, then goes to Tommy Town for the breeding season.”

Don’t Sell, who hopped at the break and was then hustled into a contending position, finished a neck in front of Gypsy Blu and paid $3.80 and $2.80 as the 2-1 second choice.

Ridden by Abel Cedillo, Gypy Blu, who had a neck on the winner three furlongs from home while in third position, out-finished S Y Sky to run third by a neck and paid $4.60 to show while off at 8-1.