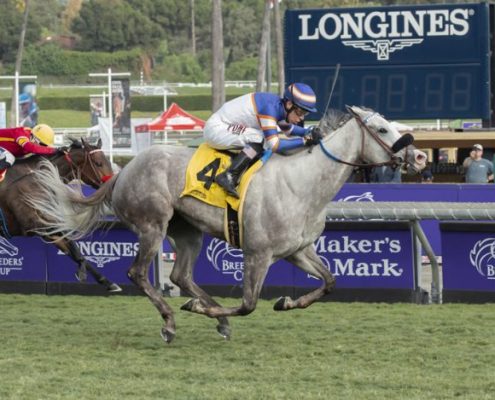 by SantaAnita.com
ARCADIA, Calif. (Nov. 2, 2019)–Nick Alexander’s homebred Just Grazed Me rallied from off the pace to take Saturday’s first race at Santa Anita, the Grade III, $100,000 Senator Ken Maddy Stakes, by 1 ¼ lengths under Geovanni Franco. Trained by Phil D’Amato, the 4-year-old California-bred daughter of Grazen notched her third consecutive win while getting 5 ½ furlongs on turf in 1:02.94.

With favored Girls Know Best and longshot Kentan Road battling for early supremacy, Just Grazed Me got a perfect stalking trip under Franco while a joint fifth heading into the far turn, advanced to third leaving the quarter pole and and accelerated through the final eighth of a mile to win as much the best.

“We broke nice and she settled into a good spot,” said Franco, who has been aboard Just Grazed Me in her last four starts. “There were some really fast fillies in there today. She just does what she does and took off on the turn. Once she pinned her ears back, there was no way they were going to catch her.”

A winner of the California Distaff Handicap over the course on Oct. 12, Just Grazed Me, in her first graded stakes assignment, was off as the 5-2 second choice in a field of nine fillies and mares and paid $7.40, $4.00 and $2.80.

Out of Alexander’s Cuvee mare Fairway Road, Just Grazed Me collected her third stakes win and her sixth overall win from 10 career starts. With the winner’s share of $60,000, she now has earnings of $394,332.

“She’s kind of actually changed her style more and more herself,” said D’Amato. “She’s coming from further behind with a bigger kick…She’s just finding her groove right now. It’s really nice to see a filly develop like this and hopefully have a bright future ahead of her.”

Ridden by Kent Desormeaux, Apache Princess, who was outrun early, rallied from last at the three furlong pole, had to check off heels in deep stretch and rallied to finish a good second, three quarters of a length in front of Ippodamia’s Girl.