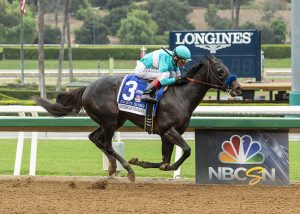 Eight Rings was bred in Kentucky by Winstar Farm and sold for $520,000 at the 2018 Keeneland September Yearling Sale.

Adrian Gonzalez of Checkmate Thoroughbreds said that “Eight Rings is a sensational stallion prospect for California breeders. He was an exceptionally precocious Grade 1 winning 2-year-old on the dirt at Santa Anita. He’s beautifully bred and even more impressive physically. He’s robust and powerful and exudes class. It is a rare opportunity to launch a stallion with this genetic makeup that is a Grade 1 winner at 2 in California. I am thrilled to present him.”