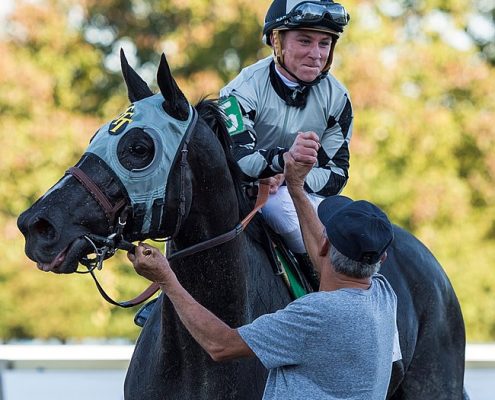 By Jeremy Balan
Grade 1 winner It Tiz Well has been retired from racing following a training injury she sustained Dec. 30 and will be bred to Tapit this season, Tommy Town Thoroughbreds farm manager Mike Allen said Jan. 17.

Allen said the 4-year-old Arch filly was injured in her final work at Santa Anita Park Dec. 30 and later a fractured sesamoid was discovered.

“After her last work she came back lame, and we found a chip in her scan, so we made a decision to stop on her instead of putting her through another year of training,” Allen said of the Jerry Hollendorfer-trained filly, who earned her top-level win in the final start of her racing career Sept. 23 in the Cotillion Stakes (G1) at Parx Racing. “It’s a long way back and they don’t always run like they used to. Instead of possibly breaking her down and doing something stupid, we decided to stop on her.”

“That’s a good way to start, with Tapit,” Allen said. “We’ll go big with her right away.”

Along with her Cotillion victory, It Tiz Well won the Delaware Oaks (G3) at Delaware Park and Honeybee Stakes (G3) at Oaklawn Park during her 3-year-old year. She also placed in the Alabama Stakes (G1) at Saratoga Race Course, and the Santa Anita Oaks (G1) and Santa Ynez Stakes (G2) at her Southern California base in 2017, and earned more than $1.1 million in 10 lifetime starts. Bred by Allen Branch and Susan Branch, she is out of the stakes-winning Tiznow mare It Tiz.

“She was definitely one of the top fillies last year and hopefully she’ll be a top broodmare,” Allen said.