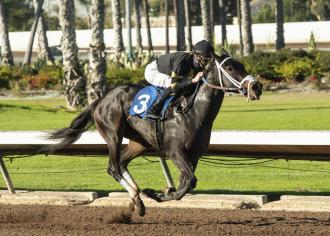 Racing without blinkers for the first time, Kookie Gal rallied from fourth in a field of six to win the Soviet Problem Stakes by four lengths. Ridden by Flavien Prat, Kookie Gal ($4) was timed in 1:37.18.

Prat said the absence of blinkers “helped a lot” for Kookie Gal, who was sent off favored.

“She got a little keen, but settled on the backstretch,” he said.

Hotitude, who broke from the rail, set an early pace of 24.07 seconds for the opening quarter-mile, disputing the lead with Creative Instinct, who led through a half-mile in 48.45. Kookie Gal rallied three wide to pass those two runners and take the lead with a furlong remaining.

“She gave me a good kick in the lane,” Prat said.

Hotitude edged Creative Instinct by a half-length for second. All Tea All Shade finished fourth, followed by Gotta be Lucky and Time for Suzzie.

Kookie Gal, who is trained by Peter Miller, is the first stakes winner for Boisterous, who is by Distorted Humor. Kookie Gal is owned by Gary Barber and Wachtel Stable, who bred the filly.

Kookie Gal has won 2 of 3 starts and earned $89,000. She won her debut in a maiden special weight race for California-breds at Santa Anita on Oct. 18 and was fifth in her stakes debut in the Grade 3 Jimmy Durante Stakes at a mile on turf at Del Mar on Nov. 24.