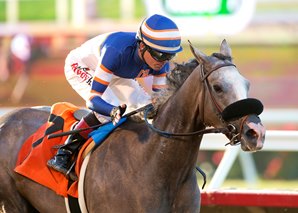 Although she won around two turns in her last starts May 28 in the Melair Stakes at Santa Anita Park, it would be hard to argue that one-turn events are not her best option after a 7 3/4-length romp in Del Mar’s feature Friday.

The 3-year-old daughter of Grazen broke out at the start of the Fleet Treat, settled just off pacesetter Fantasy of Luck, blew by in the turn, and opened up with ease under a hand ride from jockey Tyler Baze.

Fantasy of Luck ran the first quarter in :22.46, but the Phil D’Amato-trained Enola Gray put a head in front through a half in :45.02 and effortlessly drew away through six furlongs in 1:08.83. She finished off the seven furlongs in 1:21.24. D’Amato stablemate Allsquare, who also finished second in the Melair, rallied from last in the five-filly field to complete the exacta, 1 1/4 lengths ahead of Fantasy of Luck.

“She’s a pretty special filly,” Baze said after the race. “She’s pretty push-button. She doesn’t mess around. She goes out there and loves to do what she does. I pretty much stay out of her way. … To ride an animal like this—to ride any of these animals—you go from zero to 40 and there ain’t nothing like it in the world.

“To have that much horse under you, it’s just that feeling inside you where your heart goes, ‘Yes. She’s here for me today and we’re going to get the job done.'”

The victory follows a 2 1/4-length win in the Melair and her debut rout by 16 1/4 lengths at Santa Anita in April.

“She’s learning to relax in her races and flash a turn of foot,” said D’Amato, who also indicated he was not sure when Enola Gray’s next start will be. “She’s slowly coming around. She showed a new dimension today. She sat off the pace and kicked home and did it the right way. There’s still a lot of room for improvement and development in her.”