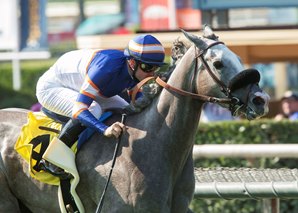 By Jeremy Balan
Arcadia, CA (July 1, 2017)-A five-time California-bred stakes winner before her start in the $100,000 Wilshire Stakes (G3T), Nick Alexander’s Enola Gray had yet to beat open-company stakes competition in three tries, but she cleared that hurdle impressively July 1 at Santa Anita Park. Watch Video

With an uncontested, open-lengths lead through much of the mile grass test, the homebred Grazen filly set blazing fractions and never let her challengers get within striking distance en route to a two-length win over Madame Stripes.

The Phil D’Amato-trained 4-year-old filly broke well with fellow speedster Juno, but easily took command as she entered the first turn under jockey Flavien Prat. The fractions went in :22.36, :44.72, and 1:08.73, as Enola Gray opened a five-length lead on Juno in the backstretch.

“She’s just naturally fast,” Prat said. “She’s not that quick, but once I got to the first turn, she got her stride and started to pick up the bit. Finally on the backside she dropped it. I know she was going fast, but she was comfortable.”

Turning for home it became apparent there would be no closing threats and the even-money favorite finished off the mile in 1:33.03. Madame Stripes, who raced in third, another three lengths behind Juno midway through the race, came in a determined second, 3 1/2 lengths ahead of Juno. After Juno came Sheeza Milky Way, Prize Exhibit, and Place des Vosges.

“She was ultra impressive today,” D’Amato said. “To set those fractions like she did—when she kicked in, I said, ‘Wow. Maybe this is what she wanted to do all along,’ and he still couldn’t pull her up on the backside.”

Out of the More Than Ready mare Unsung Heroine, Enola Gray now has seven wins from 11 starts and $573,100 in earnings. The Wilshire was her first two-turn race since she defeated Cal-breds on dirt in the Melair Stakes in May of 2016. Her previous three open-company attempts came in the Beverly J. Lewis (second), the grade 1 La Brea (third), and the grade 2 Monrovia (fifth) last time out May 27.

“(In the Monrovia) we got into a speed duel with three other horses and it’s hard to get her to relax,” Alexander said. “So, going a mile she can go a bit slower, but she still (had) a big lead. And when she’s on a lead, you can’t catch her.”

While D’Amato might have been concerned with her quick fractions, Alexander said her speedy journey only increased his confidence.