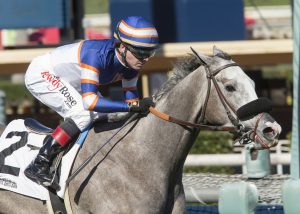 Breaking from post position two in a field of eight older fillies and mares, Enola Gray sat just outside of eventual third place finisher Desert Steel down the hill through splits of 21.55, 43.04 and 1:05.86. Head and head at the dirt crossing three sixteenths of a mile from home, Enola Gray asserted her superiority leaving the sixteenth pole and won in-hand.

“I had a beautiful trip,” said Baze. “She’s an unbelievable filly. Once I put Bejarano away (aboard Desert Steel) it was pretty much over from there and I just kept her attention.”

Off at 3-5, Enola Gray paid $3.20, $2.40 and $2.10. A winner of the California Distaff Handicap down the hill three starts back, she is now unbeaten in two starts over the unique hillside layout. Enola Gray, who was most recently third in the Grade I, seven furlong La Brea Stakes on Dec. 26, now has five wins (four of them stakes) from eight starts. With the winner’s share of $90,000, she now has earnings of $449,100.

“I really, truly believe the sky’s the limit with this filly,” said D’Amato. “We’re going to plan to stretch her out later on in the year, and then I think she’ll be even more effective.”

Alexander, a longtime owner/breeder in California who is well known to millions of Southlanders through his Nick Alexander Imports radio commercials (“Nick Can’t Say No”) is now chairman of the Thoroughbred Owners of California (TOC) as well.

“She’s a neat horse, she really is,” said Alexander. “Her dam (Unsung Heroine, by More Than Ready) had not had anything worth a darn before that. Everyone that gets on her says that you can’t even feel her hit the ground. She just has one of those big, long strides. She’s a sweetheart.”

Grazen and Alexander made it back to back wins when the three-year-old homebred All of a Sudden made her second start, in the third race on the card, a winning one in taking the Cal-bred maiden special by a head.