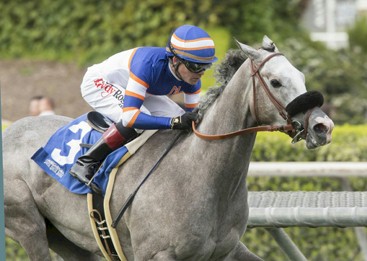 From Santa Anita Publicity
ARCADIA, Calif. (March 18, 2017)–In what may have been her best performance to date, Nick Alexander’s homebred Enola Gray rocketed clear of her competition three sixteenths of a mile from home as she went on to win Saturday’s $100,000 Irish O’Brien Stakes for Golden State Series eligible fillies and mares by a comfortable four lengths under Tyler Baze.  Trained by Phil D’Amato, she got 6 ½ furlongs while in-hand in 1:11.91.

Breaking from the inside in a field of seven California-bred or sired older fillies and mares, she was at once on terms with speedy longshot Emmy and I while well within herself heading to the half mile pole.

“This may have been her best race,” said Alexander.  “There was a lot more speed in there today than in the last few races…I think Tyler knows that what he does best is to just barely put any pressure on the reins.  He’s pretty much loose reining her now.  She can go so fast early and not get tired…She has such a light touch on the ground.  It’s not taking a lot out of her.  I’m not an expert but, she’s the damndest horse I’ve ever had.”

“This filly, she loves the hill,” said Baze, who has been aboard for all six of her career wins.  “She loves the grass.  She was just out there having fun.  It takes a few strides to get going but once she does, it’s like riding on a cloud.  This filly is unbelievable.  I can’t wait until next time.”

In taking the Irish O’Brien, Enola Gray is now unbeaten in three hillside starts.  Additionally, she notched her fifth stakes win, improving her overall record to 9-6-2-1 and with the winner’s share of $60,000, she increased her earnings to $509,100.

With Flavien Prat aboard, Desert Steel was second turning for home and stayed there, finishing 1 ¾ lengths in front of Lily Kai.  Off at 6-1, Desert Steel paid $4.60 and $3.20.