This son of Ministers Wild Cat is out of Cape Town Charmer (by Cape Town) this seven-year-old earned $27,000 for winning and was timed in 1:41.63 and increased his lifetime earnings to $350,551. Toledo Eddie’s overall record shows twelve wins, eight seconds and one third from forty starts.

Bred in California by Tommy Town Thoroughbreds, LLC and out of the Pioneering broodmare Lost Bride, she has now earned $76,530 in her five race career.

Arcadia, CA (February 26, 2016)-Herunbridledpower a homebred of Tommy Town Thoroughbreds, LLC broke her maiden as the even money favorite scoring by three parts in a five and a half panel event.

The Kafwain three-year-old filly out of Natural Singer R N (by Unbridled’s Song) improved her lifetime record to a win with two seconds from three starts earnings now stand at $31,000. She is a half sister to the multiple stakes winning Singing Kitty.

Mc Hottie is in Friday’s $75,000 Island Fashion Overnight Stakes and is by Ministers Wild Cat, out of the Mr. Greeley mare Gender Motors, was bred by owner Tommy Town Thoroughbreds and is trained by Henry Dominguez. She has one win in eight starts, earnings of $30,030 and is coming off a Jan. 16 maiden win.

Whine for Wine is entered in the $75,000 Curribot Handicap. Whine for Wine is by Ministers Wild Cat, out of the Jump Start mare Mrs. Began, was bred by owner Tommy Town Thoroughbreds and is trained by Johnnie Nall. He has three wins in 16 starts, earnings of $172,000 and is coming off a fourth in a Dec. 28 optional claimer.

In the $100,000 Mine That Bird Overnight S. is Hemakesmyheartsing by Kafwain-Heart Six (Forest Camp). He is another Tommy Town homebred competitor and is looking for his second-in-a-row victory having graduated last out. 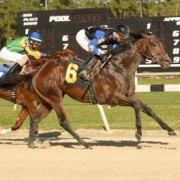 By Nick Fortuna DRF.com
OLDSMAR, Fla. – Barbados put his disappointing effort at the Breeders’ Cup in the rearview mirror Saturday at Tampa Bay Downs, rallying powerfully down the stretch to win the $62,000 Pelican Stakes by a length over Normandy Crossing while making his first start of the year. Fast Flying Rumor, who was seeking his fourth straight win at this meet, finished fourth after tracking the early pace.

Barbados, a 4-year-old Speightstown colt bred by Tommy Town Thoroughbreds, has won four of 11 career starts and earned $352,220 for Paul and Sue Hanifl’s Suzanne Stables. He won the $100,000 Spectacular Bid Stakes and the Grade 3 Hutcheson Stakes early last year at Gulfstream Park and later ran second to 2015 champion sprinter Runhappy in the Grade 3 Phoenix Stakes at Keeneland on Oct. 2

Trainer Michael Tomlinson said an abscess on the horse’s right back heel popped six days before the Breeders’ Cup Sprint on Oct. 31 and led to a quarter crack. Tomlinson fit Barbados with a bar shoe in the Sprint, but the horse finished an uncharacteristic 12th of 14.

“He was sound, but he just put out no effort with the bar shoe,” Tomlinson said. “He didn’t like it at all. The time we’ve spent since the Breeders’ Cup has been growing his feet out, getting his back feet healthy again. We’re looking for big things from him this year. He’s got an extreme turn of foot when he puts his mind to it.”

Fast Flying Rumor briefly stuck his head in front at the top of the lane, but Normandy Crossing continued on determinedly and Barbados, who had advanced three wide on the turn, came charging down the lane to quickly overtake him, stopping the clock for six furlongs on a fast track in 1:09.96. Barbados paid $4.80 as the favorite.

“He scared us several times [in the race], but when he gets free sailing, he always comes like a house on fire, and Victor did an excellent job on him today – tucked in, saved ground, got him out, and gave him somewhere to go,” Tomlinson said.

“I tried to lay second or third, and he kind of put himself a little farther back than I wanted,” Lebron said. “But once I gave him a clear shot, he came through. It was a good feeling.”

Fast Flying Rumor, trained by Gerald Bennett, had won two consecutive five-furlong turf sprints, including the $90,000 Turf Dash on Jan. 9, before scoring on dirt in a $50,000 optional claimer Feb. 5. Jockey Ronnie Allen Jr. said the horse got tired in the stretch.

“He just didn’t show up today,” Allen said. “I had a lot of horse around the turn, but in the lane, I had nothing. I think the heat might have gotten to him.” 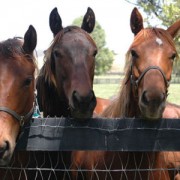 By Old Topper out of Miss Pitz this gelding has earned $98,388 from his fourteen starts. With a win, five seconds and two thirds Seedsandstemsagain has earned over $7,000 per start. He was bred by Jim Robinson, Ron Brewer & Jim Lyberger.

Calm the Sea “hopped a bit at the start, dueled three deep between horses, took a short lead into the stretch, battled outside the runner-up under urging in the drive and inched away late.”

Out of the multiple grade 2 winning millionairess Miraculous Miss (by Mr. Greeley) Calm the Sea was bred in the Bluegrass by Hill ‘n’ Dale Equine Holdings, Inc & Edward McGhee; the filly was a Tommy Town $125,000 weaning purchase at the Keeneland venue in 2012.

January 31, 2016
Six-year-old Kafister picked up his tenth lifetime win when scoring with his wire-to-wire effort by half a length in a Santa Anita $60,000 allowance race going six and a half panels in 1:16.29.

The son of Kafwain out of the Mari’s Book broodmare Register has now earned $286,650. His stellar record from twenty-five starts; ten wins, three seconds and four thirds. In his last six starts, Kafister has two wins, two seconds and two thirds.

Run for Retts is going in the $200,000 Xpressbet California Cup Oaks one mile turf. This Tommy Town homebred has earned $60,430 and is by Ministers Wild Cat out of Mrs. Began, by Jump Start.

In the $250,000 California Cup Derby going one mile and one sixteenth over the main track oval is Tough It Out; trained by Phil D’Amato, Nick Alexander’s homebred, a grey gelding by Grazen, broke his maiden two starts back at Del Mar going one mile on turf and was off at 5-1 in the King Glorious.

Grazen Sky a homebred of  Nick Alexander (Grazen-Sky Marni, by Sky Mesa) tries the $250,000 California Cup Turf Classic Stakes nine furlongs on the Santa Anita turf course. He is a stakes winner of $293,018.

The odds-on sophomore filly broke alertly and attended the early pace while three wide and when aroused drew off by many in a hand ride. Mc Hottie cruised to her win earning $12,300 in the Sunland Park maiden allowance five and half furlong race.

The Tommy Town Thoroughbreds, LLC homebred is out of Gender Motors (Mr. Greeley) and Mc Hottie has now earned $30,030 from her eight lifetime starts showing a win, a second and a third.