Overcoming a poor start, My Grandpa out dueled the gutsy filly Alittlelesstalk in a prolonged drive and scored by 1-¼ lengths in 1:49.71 for 1 1/8 miles.

For Carreno, it was his first Emerald Downs’ stakes victory. The veteran jockey rode My Grandpa to a third in the Seattle Slew Stakes last month at 34 to 1 odds, and said he pled with Wenzel for a return engagement in the Derby.

“Since I rode him last time, I’ve been asking Tom about riding him again,” Carreno said. “He has a tendency to break a little slow, but he’s very nice and it’s great to get a stakes win.

Bella Luma is by Ministers Wild Cat, out of the Bold Badgett mare Bold Roberta, was bred by Thomas Bachman, is owned by Fairview LLC and Linda Brown and is trained by Ed Moger Jr. 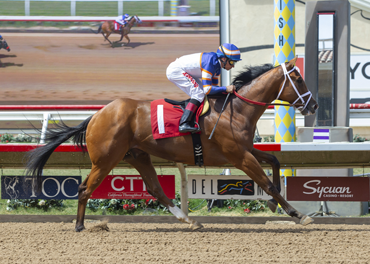 “We were going a little fast in the beginning, but he was comfortable and good horses can do that,” said winning jockey Drayden Van Dyke. “The key with him is to get him to switch leads properly. I was on him for his most recent work and we were working on that (changing of leads). Today he did it perfectly.”

Lieutenant Dan is by Grazen, out of the Indian Charlie mare Excusabull, was bred by owner Nick Alexander and is trained by Steve Miyadi.

“The turf to dirt (switch) was because that’s the Golden State series, we have no choice,” said Miyadi. “The cutback (in distance) meant that I didn’t have to train him as hard and I’m always worried about his weight, so that was a blessing in disguise. We trained him lightly, had one good workout eight or nine days ago, and here we are. We’ll take it. He’ll stay in the Golden State series and probably come back here in the fall for the Cary Grant.”

Lieutenant Dan has four wins in nine starts, earnings of $304,020 and was coming off a third in the June 22 Snow Chief.

He ran the seven furlongs in 1:23.67 and won by three lengths at odds of 2-1 in the field of five. Longshot Oliver was second and Cruel Intention third.

Bred in California by Gary Barber she is out of Sky Diver, (Tale of the Cat) and has $61,600 in her six starts.

Boisterous was California’s 2018 leading freshman and is a multiple Grade I winner by Distorted Humor–Emanating, by Cox’s Ridge and he stood for $5,000 live foal in 2019.

Del Mar, CA (July 17, 2019)-Give Me the Lute, a three-year-old son of Boisterous, graduated in a Cal-bred maiden special taking the Del Mar nightcap by over two lengths.

Give Me the Lute is out of Steal the Lute, by Midnight Lute and he has started four times and has earned $54,751. He has the maiden win, as well as a second and third for his breeder/owner Gary Barber.

California’s 2018 leading freshman sire Boisterous is a multiple Grade I winner by Distorted Humor–Emanating, by Cox’s Ridge and stood for $5,000 live foal in 2019.

Pleasanton, CA (July 6, 2019)-Sophomore filly A Lonna At the Top graduated from the maiden ranks with a driving finish to take a open maiden allowance at P-Town.

The daughter of Old Topper and Luscious Lonna, by Benchmark now has earned $33,600 for owner breeder Jon Harris.

The now pensioned Old Topper is the sire of earners of over $22 million and has an average earnings per runner of close to $50,000.

Steve Andersen
Cypress, CA (June 29, 2019)-Queen Bee to You, the only mare in a field of six, scored a nose win over 16-1 Tule Fog in Saturday’s $100,351 Bertrando Stakes for California-breds at Los Alamitos, giving trainer Andrew Lerner his first career stakes win.

The victory came a week after Queen Bee to You was denied an entry in the $100,000 Dream of Summer Stakes for statebred fillies and mares at Santa Anita by a review panel of veterinarians and stewards who have scrutinized the race, training, and medical records of horses entered to race at Southern California tracks since mid-June.

Queen Bee to You was cleared to run in the Bertrando Stakes by a panel of officials that consisted of two of the five people who also reviewed entries at Santa Anita. Queen Bee to You was transferred to Lerner’s stable in early June after previous trainer Mike Pender was suspended by Santa Anita stewards for 30 days over animal welfare violations, the stewards wrote in a ruling issued on June 7.

“They didn’t pull her out of the stall,” he said. “They didn’t want to take a chance, I guess.”

The Bertrando Stakes was the feature race on the opening day of the 10-day Los Alamitos summer meeting.

Queen Bee to You led by two lengths with a quarter-mile to go and was challenged by Tule Fog through the final furlong, holding a slim advantage at the wire.

Queen Bee to You was timed in 1:35.95. A 5-year-old mare by Old Topper, Queen Bee to You has won 5 of 27 starts and earned $410,419. She was second in the Fran’s Valentine Stakes on turf at Santa Anita on May 12 in her final start for Pender. She is owned by Christopher St. Hilaire and Adam Vali. 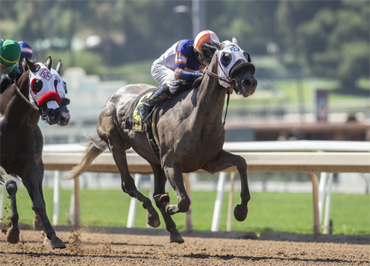 From Santa Anita Publicity
ARCADIA, Calif. (June 23, 2019)–Winless in her five previous tries, Nick Alexander’s homebred Ruby Bradley, who was trying two turns on dirt for the first time, put in a determined stretch-long bid to prevail by a half length in Sunday’s $200,000 Melair Stakes at Santa Anita. Trained by Phil D’Amato and ridden by Aaron Gryder, Ruby Bradley got a mile and one sixteenth in 1:49.92.

Next to last in a compact field of five sophomore fillies turning for home, the daughter of Grazen kept to her task late to prevail over Tiz a Master, who was to her outside.

Named for the Millard and Rous homebred daughter of Our Blue Chip, Melair, a foal of 1983, was a multiple graded stakes winner who was conditioned by John Sadler. The Melair Stakes is part of the lucrative Golden State Series for California-bred or sired horses which is sponsored by the CTBA.

Most recently second at 4-5 in a Cal-bred maiden special going six furlongs on synthetic Tapeta at Golden Gate Fields June 1, Ruby Bradley, who is out of Alexander’s Bertrando mare Sudden Sunday, was off at 7-2 and paid $9.80, $4.00 and $2.80.

Ridden by Heriberto Figueroa, Tiz a Master was third turning for home and finished 3 ½ lengths in front of Violette Szabo for second money. Off at 3-1, Tiz a Master paid $4.00 and $3.00.

SANTA YNEZ, Calif. (June 22, 2019) – California stallion Old Topper has been retired from breeding and pensioned at Tommy Town Thoroughbreds. He is 24.

The son of Gilded Time was a perennial leading sire in California, with 24 stakes winners and lifetime progeny earnings of more than $22 million. Old Topper’s leading earner is Ain’t No Other ($715,280) and his runners included graded winner Top Kisser.

On the track, Old Topper was a multiple graded winner.

Arcadia, CA (June 14, 2019)-Boisterous juvenile Next Flight finished third in his debut in late May and came back today to win a stretch battle in a $65,000 maiden special at Santa Anita.

Bred by his owner Gary Barber, the gelding is out of Flight Service, by Henny Hughes and has now earned $46,800.

California’s 2018 leading freshman sire Boisterous is a multiple Grade I winner by Distorted Humor–Emanating, by Cox’s Ridge and stands for $5,000 live foal