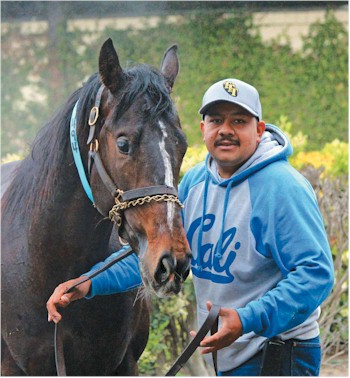 BY EMILY SHIELDS Photos Courtesy of Robin Hardin
His name is Octavio Medina-Ramos, but his friends and co-workers call him Chato. For the last 13 years, he has been following in the footsteps of his brother, Margarito, who is also a heralded Tommy Town Thoroughbreds employee. Medina-Ramos has gone from a complete equine novice to the foreman of the Tommy Town training barn.

Originally from Michoacan, Mexico, Medina-Ramos came to the sprawling Santa Ynez ranch after his brother did. Tommy Town was young at the time, having been established by Tom and Debi Stull in 2000, and Medina-Ramos, with no prior horse experience, began working in September 2003.

As his knowledge evolved, so did his daily tasks. Medina-Ramos operates the water truck on the training track, which is an important part of Allen’s track-surface management regimen.

“It’s a seven-furlong track, and we work it every day,” Allen said. “We harrow it every morning before the horses go out; then we put water on it at night. I also have a grader, which we use to rip up the track twice a week so the base doesn’t get too hard.”

Medina-Ramos manages the employee bunkhouse, watches the broodmares on the regular night watchman’s day of, applies mud after horses breeze, and also bandages them, pulls manes, and checks legs in the morning.

“I check the legs too, but sometimes he calls my attention to something he sees,” Allen said.

Medina-Ramos is instrumental in helping Allen handle the stallions when needed. 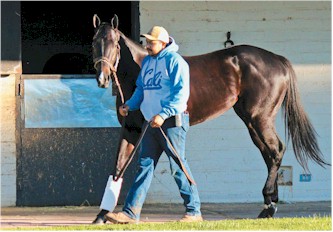 “Of all our stallions, the most aggressive breeder is Boisterous,” Allen said of the $1,458,792-earner and multiple graded stakes-winning son of Distorted Humor who stood his first year at Tommy Town in 2015. “But Chato gets along with him well, which makes it easy.”

Some of Medina-Ramos’ favorite horses to graduate the Tommy Town program are Ms Wakaya and It Tiz Well. Ms Wakaya is a California-bred daughter of Flower Alley—Ms Vanenzza, by Successful Appeal. She broke her maiden second out at Santa Anita and was second by a length in the $200,690 Golden State Juvenile Fillies in 2016. It Tiz Well, a Kentucky-bred Arch flly, is a $230,000 yearling auction purchase by Tommy Town. She has won half of her six lifetime starts, including the $200,000 Honeybee Stakes (G3) at Oaklawn Park, and she fnished third in the $400,690 Santa Anita Oaks (G1).

Medina-Ramos credits both Allen and his brother Margarito for teaching him how to work with and handle horses carefully. He is invaluable to Allen, who said, “Chato is a valued employee and is known for his honesty. I can rely on him to always tell the truth in any situation and to help make an educated decision on how to correct any problems there may be.”