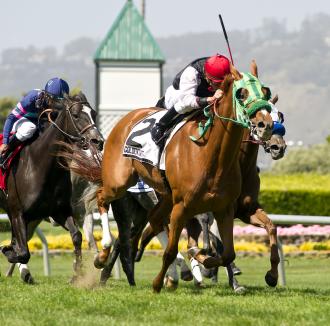 By Chuck Dybdal
Albany, CA (May 12, 2018)-Bella Luma ($26.20) got patient handling from Catalino Martinez and rallied from well off an honest pace to score a convincing victory in the $60,075 Golden Poppy Stakes at Golden Gate Fields on Saturday.

Overlooked in the wagering despite a two-race winning streak, Bella Luma had only one rival beaten heading into the first turn. She moved up a bit on her own down the backstretch as Dalsaros and Turkish Tabby were going at a good pace up front.

Martinez was basically biding his time and began to move midway around the second turn. He had the winner in full stride at the quarter pole as the field began its turn for home.

“He knew there was a lot of speed, and they were kinda all jammed together inside,” winning trainer Ed Moger Jr. said of the trip worked out by his jockey.

Moger and Martinez were not worried about being wide since they had a clear path to the wire, and Bella Luma looked a winner as the field approached the eighth pole.

She defeated favored Coachwhip by 1 1/4 lengths, winning the 1 1/16-mile turf test in 1:43.12. Coachwhip, who sat a bit farther back than in recent tries, rallied from midpack to be second by a head over Dreamarcher, who was last until entering the stretch. Dreamarcher’s stablemate Turkish Tabby was fourth.

“We liked her last year, but she’s a big filly and getting better with age,” Moger said of the winner, a 4-year-old daughter of Ministers Wild Cat.

Thomas Bachman is the breeder and co-owner with Linda J. Brown.