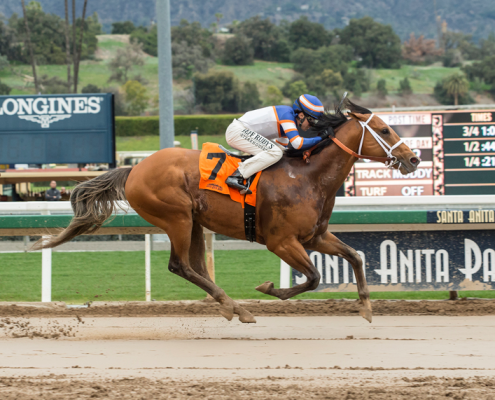 ARCADIA, Calif. (March 11, 2018)–A switch from 6 ½ furlongs on turf to a muddy main track, five scratches and a perfect stalking trip under Joe Talamo resulted in Nick Alexander’s homebred Tough Sunday notching his first-ever stakes win in Sunday’s $100,000 Sensational Star Stakes at Santa Anita. Trained by Steve Miyadi, the 6-year-old full horse by Alexander’s Grazen, prevailed by one length over a fast closing Solid Wager while getting the distance in 1:15.68.

Out of Alexander’s General Meeting mare Sunday Dress, Tough Sunday was orphaned at birth, pale-fed for the first six months of his life and today, in his 18th career start, he enjoyed his biggest win. Needless to say, emotions were running high in the Winner’s Circle.

“I’m shaking, I’m going to cry,” said Alexander. “We thought several times that he was the best horse in the race and he would just miss. With this one, everything worked out. The right horses scratched, he had the right spot outside of the speed. Joe rode him perfectly, the track was a little off, which is in his breeding and he just sailed.”

Second, a neck off favored Richard’s Boy a quarter mile out, Tough Sunday switched leads on cue straightening for home and took command a furlong out under aggressive handling.

“What a cool horse, he pretty much did all the work today,” said Talamo. “I just put him in the race. We had a great set up with Masochistic and Richard’s Boy inside of us and we just sat off of them and then he did all the work down the lane.

“His name suits him pretty well. That’s so remarkable for him to not only make it to the races, but to go on and win a stakes like this.”

“When I first went to go work for (the late) Mike Mitchell, that’s where I met Nick,” said the ordinarily staid, but emotional Miyadi. “That was a long time ago and Mike told me that the number one rule was that when I stood with him, there was no cheering. I know (Mike’s) watching and I know he’s mad, because I cheered, the length of the stretch today. This horse has had a lot of things against him and he’s overcome them.”

Ridden by Martin Pedroza, Solid Wager rallied from next to last to take second by a neck over Smokey Image. Off at 7-1, Solid Wager paid $6.60 and $4.80.

Mid-pack early, Smokey Image rallied well under Tyler Baze for third money, finishing a half length in front of Tribal Storm. Off at 9-1, Smokey Image paid $5.80 to show.