Alexander Homebred Tough It Out Rallies to Win $200,000 Echo Eddie 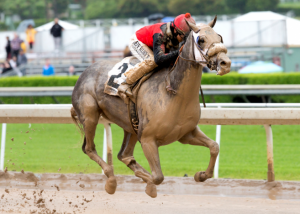 from SantaAnita.com
ARCADIA, Calif. (April 9, 2016)–Nick Alexander’s homebred Tough It Out came with a late rush to take command a sixteenth of a mile out en route to winning Saturday’s $200,000 Echo Eddie Stakes at Santa Anita by 4-1/2 lengths. Trained by Phil D’Amato and ridden by Joe Talamo, the 3-year-old Grazen gelding got 6-1/2 furlongs over a sloppy track in 1:17.60.

“This is just a tremendous feeling,” said D’Amato, who registered his second win of the day and now has a commanding five win lead (39-34) in the Winter Meet trainer standings with just one day remaining. “Mike Mitchell (his late mentor) and Nick Alexander. We wouldn’t be here if it wasn’t for them.”

“We had a good trip,” said Talamo. “Phil just told me to ride him like Kent Desormeaux on Exaggerator, so we stayed in the five path and went from there. I thought the track was pretty fair for the first few races, and these last few, you can come from behind. It feels great.”

Ridden by Gary Stevens, Gold Rush Dancer made a bold move at the rail three furlongs out, opened up by about three lengths with a furlong to run, but was no match for the winner late.

Ridden by Martin Pedroza, Xingontothebone rallied three wide through the lane and proved third-best. Off at 4-1, he paid $3.60 to show.